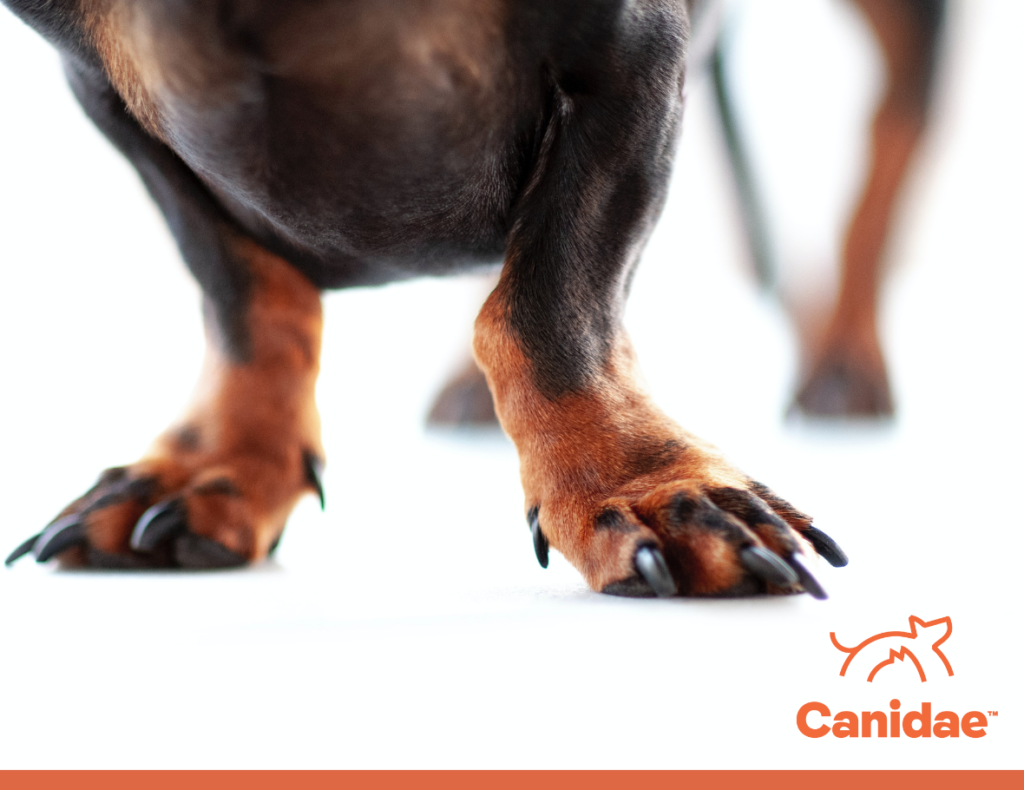 You’re probably pretty familiar with your dog’s claws by now, whether it’s the clickety-clack sound they make as she trots across the kitchen floor or the reassuring touch as she gives you her paw. One thing you might not have known is what the extra claw (the one that sits a little higher up) is called. Allow us to introduce you to the dewclaw.

Acting similarly to a human thumb, the dewclaw (sometimes written as two words, “dew claw”) can be found at the upper, inner part of your dog’s front paws. If your dog has dewclaws on its hind legs as well as its front legs, or doesn’t have them at all, there’s no need for alarm… let us explain!

Do All Dogs Have Dewclaws?

All dogs are born with a front dewclaw on each paw, and some of them have more: The breed standard for Great Pyrenees dogs is to have double dewclaws on each hind leg!

A select few breeds such as Saint Bernards (famous for their daring rescues and barrels of brandy), Icelandic Sheepdogs and Spanish Mastiffs have dewclaws on their rear feet too. These rear dewclaws are a bit different: they are only attached by skin and are much more mobile, compared to front dewclaws that are attached to muscle, ligaments and bone.

Are you sitting there puzzled, wondering why your dog doesn’t have ANY dewclaws? Don’t worry, they were probably removed straight after they were born. We’ll dig deeper into dewclaw removal a bit later.

Why Do Dogs Have Dewclaws?

We’ve all seen cats climbing trees, but imagine the sight of your dog doing the same thing. This surreal image might seem like the stuff of dreams (or nightmares for some!) but it actually used to happen — modern dog’s ancestors used to climb trees and cliffs! The extra grip from their dewclaws gave them the ability to scale such heights.

In fact, there are a few breeds that still do some dewclaw-assisted climbing. In colder climates like Alaska and Antarctica, dogs have been known to fall through the ice. Thankfully their dewclaws help them climb out of freezing waters and return to solid ground. Next time your dog whines about having a bath let them know they haven’t got it so bad!

Evolution is a peculiar thing, and while dewclaws started out as climbing aids, through time they moved higher up the paw. This gave dogs extra traction and stability when running at high speeds, which meant they were able to avoid pacy predators. To this day they still help your dog turn quickly when they’re sprinting around the park.

Should Dewclaws Be Removed?

In short, no… unless there is a very important reason!

As we mentioned, the front dewclaws are attached to the bone and help your dog’s balance and stability.

Some breeders remove front and rear dewclaws a few days after birth, with the idea being to prevent injury or “improve” the dog’s appearance. However, serious dewclaw injuries are uncommon, and performing surgery on a dog for purely aesthetic reasons is hard to defend.

There are some cases where dewclaw removal is necessary. If a dog gets a serious infection, has a traumatic injury, or develops a tumor in the area, then a veterinarian may need to operate.

How Do I Care For My Dog’s Dewclaws?

While dewclaw injuries are uncommon, they are not unheard of — especially for working dogs. Regardless of your dog’s lifestyle, any of his nails can get broken, pulled off or split, so when you think about all of the mucky places he loves exploring, it’s no surprise these nails can get infected.

Some vets say the dewclaw is more likely to get injured than any other nail as it can become overgrown or get caught on things as your dog pulls away. What’s more, if your pup has rear dewclaws they are particularly vulnerable as they aren’t firmly attached and can dangle loosely.

If your dog does have a dewclaw injury you should take them to your veterinarian. They will be able to diagnose the problem, trim overgrown nails, remove damaged ones, or prescribe antibiotics and pain relievers.

Since dewclaws don’t touch the ground as often as your dog’s other nails, you need to pay special attention to them! A dog’s nails are worn down by contact with hard surfaces, but as dewclaws don’t get as much contact with the ground, you will need to trim them regularly. Be careful when you’re trimming your dog’s nails, and remember to ask your vet if you have any doubts!

While giving your pet a pedicure may feel like the height of luxury, they say the real way to a dog’s heart is through his stomach.