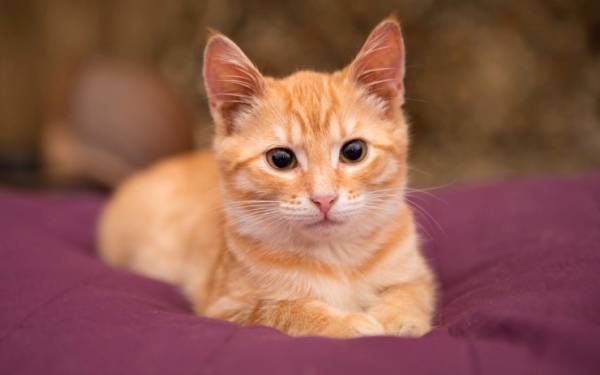 For some people, the term “tabby cat” conjures up an image of a rough looking alley cat living on the street. However, tabby is a coat pattern and not a breed of cat, and it's found in many pedigree kitties. In fact, the tabby pattern gene is found in all domestic cats! One of the most distinctive markings on a tabby cat is an “M” on the forehead. Why tabbies have an “M” is unknown, but there are some interesting legends about how they got this unique marking.

Even if your kitty isn't considered a tabby, a faint “M” can often be seen – but you may have to squint really hard to see it. The origin of the word tabby referred at first to a type of silk taffeta made in an area in Baghdad called Al-Attabiya. The fabric had a beautiful irregular wavy finish and was named after the region of origin, 'attābī. Medieval Latin adopted the name of the silk as “attabi” before it was translated into French as “tabis.” The word for this unique silk was eventually modified into English in the early 1600s as “tabby,” but it was almost 200 years later before the word was used to describe cats with coat patterns that resembled the silk fabric.

Before I tell you about the legends of the "M" marking, let's take a look at the four main tabby coat patterns:

Tabby cats with this coat pattern usually have non-broken vertical stripes that fork out from a stripe running down the middle of the back that resembles a fish bone, which is where the mackerel name comes from.

This pattern, also called blotched or marble, has circular swirls on a cat's side, usually with a bullseye design.

A spotted tabby has coat pattern markings similar to the mackerel or classic, but with spots in their coat pattern instead of stripes.

Legends of the “M” On a Tabby Cat

● A Mark from Mary

After baby Jesus was born, he was placed in a manger filled with hay. Unfortunately, the hay didn't provide enough warmth and he began to shiver from the cold. Mary wrapped blankets around him, but it wasn't enough warmth. Mary was beside herself and asked all of the animals in the stable to move closer to the manger to help warm her child with their body heat. This still didn't provide enough warmth. Mary rocked her child as he continued to cry and shiver. It seemed like nothing could pacify her baby.

A small tabby cat had been watching from a distance and knew exactly what to do to calm the child. The cat climbed into the manger, snuggled next to Jesus to warm him and began to purr. The kitty's lullaby soothed the baby who stopped crying and fell fast asleep. Mary was filled with gratitude and stroked the cat's brow, leaving the mark of her own initial on the cat's forehead to forever remind humanity that a tabby cat had comforted baby Jesus.

A story from the Islamic religion tells the tale of Muhammad and his tabby cat named Muezza. One day the cat had fallen asleep on one of his sleeves. When the call to prayer came, Muhammad didn't want to disturb Muezza, so he cut the sleeve away to avoid waking his precious cat.

On another occasion, unknown to Muhammad, a snake had slithered into one of the sleeves of his robe. Muezza saw what happened and killed the snake before it could harm Muhammad, saving his life. The prophet was so grateful to his cat that he stroked her back to give cats the ability to land on their feet, and placed his hand on her head marking an M. From that point on, every tabby cat born had an “M” on the forehead to remind the world of Mohammed's love for cats and to always respect our feline friends.

● Mark of the Moon

In ancient Egypt cats were called Mau, most likely because of the sound of their meow. The translation of the word Mau is seeing or light. Cat eyes reflect light and at night their eyes appeared so luminous the Egyptians associated cat eyes with the moon. According to legend, the “M” on the tabby's forehead is a mark of that relationship. The Egyptian Mau is the original naturally spotted tabby and a direct descendant of ancient Egyptian cats.

Of course, anyone who has been owned by a tabby cat would say the M stands for Master of the Universe or perhaps, Magnificent Ruler to remind us of our place as staff.